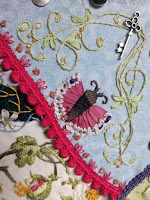 first up is the moth, in a vine you will see them in the dusk after the street lights go on banging their heads against the glass

then the duck, she was supposed to be a swan but oh well shes a pretty enough duckriding the waves of a pond

the phrase is from one of my favoriet Edith Piaf songs and is the title as well" Je ne regrette rien" I do not regret anything. 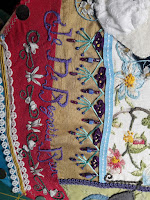 squares for watering the gardens, horses and the other family animals 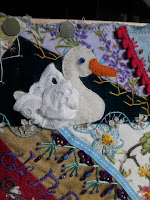 and look what decided to flower this Year! The irises are huge and have may blooms on each stalk. I suppose this is what happens when they hybernate for 8 years!

to be fair i had them in a different location and only mooverd them 2 years ago to where they are now but they didnt bloom last year either.

I also found this fellow sleeping on my allium drumstic this morning.
he must have been caught out when the sun whent down over the trees, it gets cold quite fast around here after dusk. 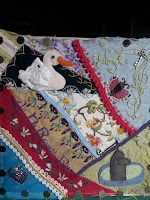 more is in bloom in the garden and ill have pictures of those too soon. 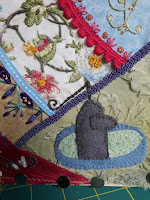 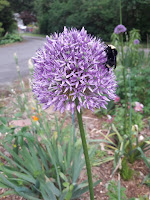 Posted by Momma Bear at 1:48 PM 2 comments: Links to this post 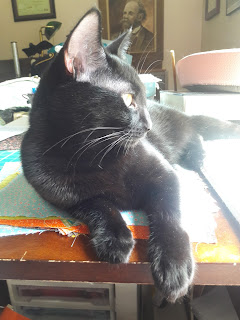 One of my inspectors is back, making sure there are no parts missing

As you can see there is a perfectly good cat basket behind her bUt no,

She must sit on my pile of work

Such is the life of a cat owner, one must put up with these sorts of foibles.

Good thing I have finished this top now

Not without more help though.

At one point while trying to get the placement just right, the catscapades ran through and messed up my ordering. 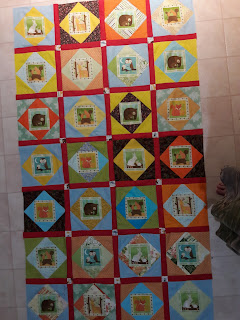 Then violet, the above mentioned menace, decided it was the perfect spot to play ball and messed up the ordering again, aaahhh!

So the top is now done, yay! It just needs borders, binding and a back.

As it happens I still managed to get two brown blocks and two deer back to back.

Oh well.
Posted by Momma Bear at 1:14 AM 2 comments: Links to this post