In chicago ST.Pats day is big, i mean really BIG. 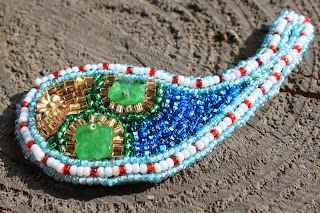 everyone in the city turns out for both the city's parade on the saturday before the st pats and then they all go to the south side to celebrate the St.Pats day parade on ST.Pats day.

we dye the chicago river green, a highly redundant act since the river is already green to begin with!

I think chicago celebrates St.Pats day more than Ireland where he started out. not bad for a St. known for chasing out snakes!

anyway my BJP is a celebration of the madness chicago gets itself into during the week of st.Pats day.

you have the south side and the north side depicted by shamrocks
and the west side by the flower to represent the city's motto "Herbs in Horto" (an urban garden) the green band is the river two branches, dyed its redundant green and the gold is for the city's grid system of streets

the mid blue is the lake and the double light blue and white with intermittent red represents the city's flag.
Posted by Momma Bear at 5:41 PM 6 comments: Links to this post