My girls are in town for a few weeks of "Mommy 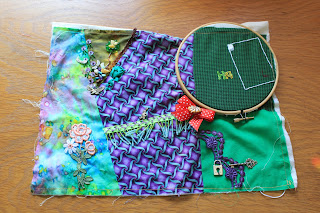 time" and they wanted to learn how to make their own CQ purse (I'm so proud!!)
so here th 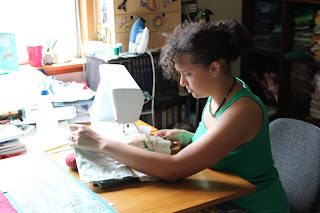 ey are making their blocks 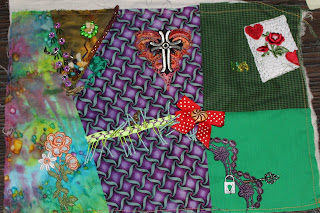 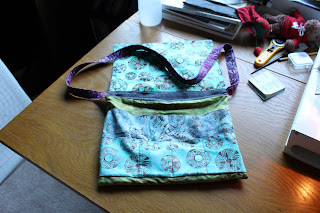 
She knows how to smile (Really!) 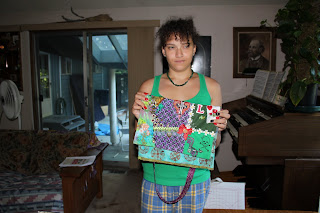 Posted by Momma Bear at 1:21 PM 3 comments: Links to this post

A story for you all

Isn't it funny how the brain works?
with my mind on random thought parade, I remembered this episode while sewing one morning, it's totally unrelated to anything I was doing at the time and I haven't thought of this in years
this is a memory that I've been meaning to right down before I completely forget all the details.
this is from when I babysat backstage for friends who were involved with the Organic theater company in Chicago. this would be around 1972-4

"I'll drive her home" Tom said with a smile. He had a warm engaging face, merry brown eyes, a small bulb of a nose, full lips and a bristle mustache.
His hair was still wet from a recent shower and was slicked back close to his head but would eventually escape into the wild mess that he could never quite control unless he cut it close or held it tight to his skull in a pony tail.
I picked up my bag and Tom put his arm around my shoulder to steer me towards the back of the theater. "the play is going well." said making nervous small talk. everything about Tom was loud from expansive hand gestures to his booming tenor.
"the applause were loud tonight and there were 2 curtain calls." he smiled down at me"yes, we did good" letting out a lusty sigh of pleasure, practically glowing from the high of a good performance.

we left the backstage through the heavy fire doors and crunched through the gravel of the parking lot to his "new" car. a WWII era jeep still painted in army green camouflage, the gas can strapped to the back with webbing and no top.
"Isn't she a beauty?" he demanded throwing his arm wide to embrace the freedom of his new toy. "yeah, It's great" I said with all the skepticism of an 11 year old girl. I looked at him sideways wondering if he was seriously going to drive me home in this deathtrap.
"get in, get in!" he said taking my shoulders and giving me an encouraging shove towards the side of the vehicle. Tom swung himself gracefully up and over the door into the drivers seat saying, "the doors are welded shut so you're going to have to climb over." Great, I thought to myself, dumping my bag into the backseat and hoisting myself over the door frame, to land heavily into the cracked leather of the unpaded seat.

"Showtime!" he chortled, as he shoved the key into the ignition. as he turned the key, the jeep growled into surly life "Isn't she great?" he said again, with even more enthusiasm if that was possible. as I looked at him, with eyebrows raised and a smile plastered on my face, I couldn't help thinking to myself, OK, he's lost it.
I had to grab onto the door as he flung the jeep into reverse and backed out of the parking lot spraying gravel in the process. Jamming it into first gear with a crunch and clank of old gears he popped the clutch and the jeep zoomed forward, bouncing down the alley towards Clark street.

He started telling me the history of the jeep, pitching his voice so it could be heard over the roar of the engine, Tom yelled "these things were made to last." and mores the pity, I thought to myself, getting a tighter hold on the door frame and frantically reaching for the handle, conveniently placed on the dash in front of me.

As we bounced high over, yet another, pothole in the street, I glanced over my left arm to make sure Tom was still driving and that I wasn't about to be launched into a parked car or random tree. He was still in his seat, hunched forward over the stearing wheel, eyes alight with manic glee, teeth barred and a shit-eating grin on his face. I was terrified and this gave me no hope for my immediate future. Not to mention the random tree, I was still convinced, we were going to hit at any moment.

by the time we pulled up to my front door, his hair had dried, in the wind of our passing, to a dark brown halo that reached out into every corner of the night sky. "Here you go!" he declared heartily, slapping the side of the jeep with his hand, making a hollow thunking noise, "safe and sound!" With a pulse to rival any heart attack victim I thought. climbing unsteadily over the side of the vehicle I took in a deep inhalation of crisp night air, I hadn't realized until then, I had been holding since the start of the ride.

Reaching for my bag I thanked Tom for the ride home. "Any time, any time!" he was clearly pleased with himself for the good deed performed on my behlf, I was just glad to be home in one piece.
As I watched him drive off into the bright Chicago night, I sat down on the curb to let my wobbly nerves and shaky knees calm down a bit before climbing the stairs and falling into bed.

I didn't figure out until much later that no roller coaster, fast car, or thrill ride could ever come close to the excitement of riding home in Toms Jeep.

bFinished! I will do this again, I enjoyed the zen 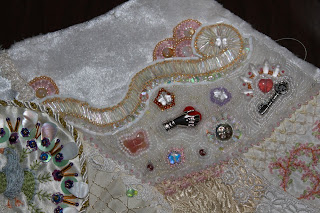 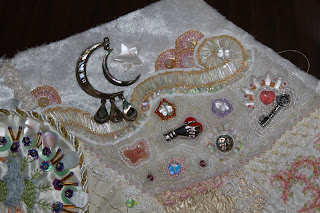 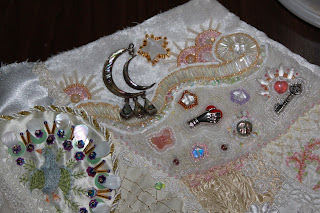 I decided I wanted to try a beaded panel on my 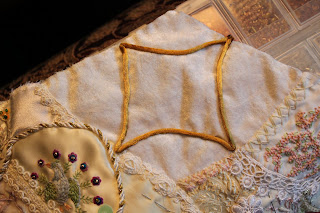 belt the kind with swirly patterns and beaded pools.
I've never tried doing this kind of beadwork before and it was "calling" out to me.
It started wanting to be framed but I decided that didn't leave enough room for the flowing pattern I wanted. the swirl at the end just sort of "grew". 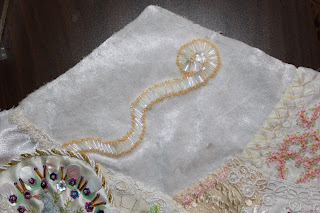 I knew the symbols I wanted to put under 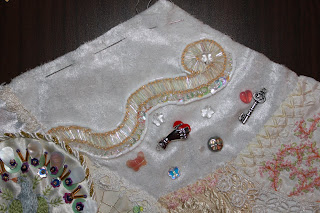 the wave were symbols for things from this past year.

looking up at the stars and really believing in them for the first time in years.

the Man-in-the-moon who watches over us and makes us dream, the impossible can be achieved, if we would only allow ourselves feel worthy of the gift.

the butterflies in our stomach as we are about to 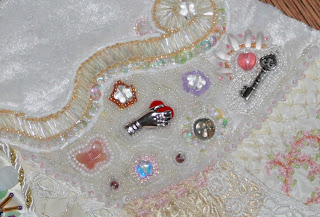 take the leap, into the unknown and do the impossible thing we have dreamed of for so long.
and at the end, finding the key to our heart,
was there, within our grasp all along, we had just to reach out our hand, overcome the darkness of our fears and grasp it gently.

let the love and hope you have kept locked away, flow from you and the most extraordinary things happen
Posted by Momma Bear at 2:50 PM 1 comment: Links to this post

Some of you may remember this piece that I 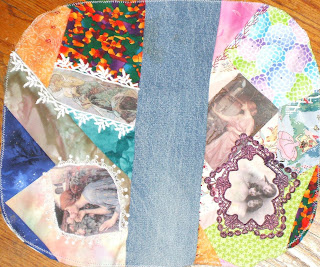 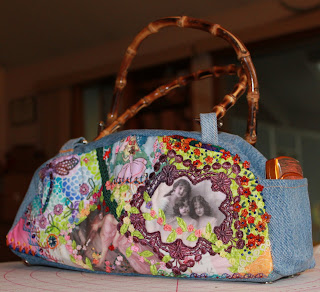 there were several lessens learned on this one like. 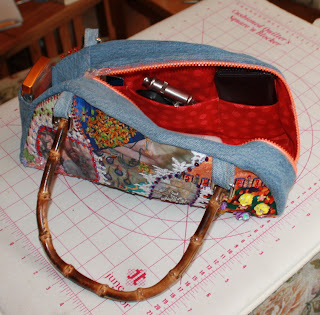 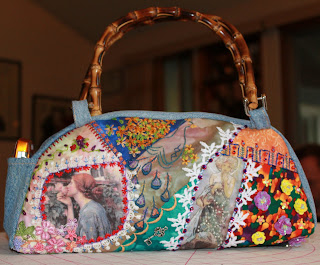 ,pin,pin and pin some more!
plastic canvas makes an excellent bottom, just stiff enough to keep the shape of your purse but not to stiff to turn while sewn inside.
you must leave at lease 3/4ths of an inch along the outside if you want to sew your purse sides together and zipper placement is important, you don't want the zipper opening at the bottom your stuff will fall out!


also discovered those snap covers you have hiding in a drawer are perfect for purse bottom savers.

I love how the accordion ribbon roses turned out, and all the beading along the side with the three girls. 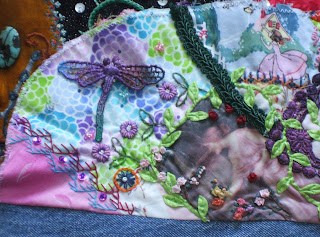 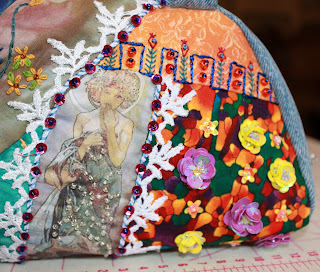 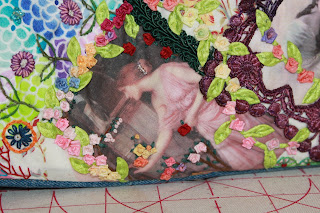 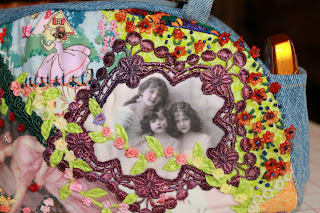 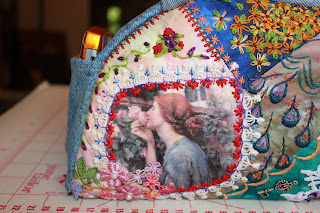 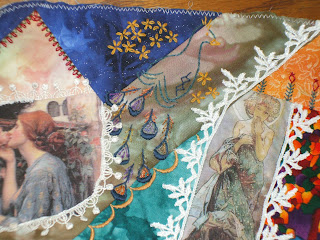 And I even love the sequin roses, an Idea I swiped 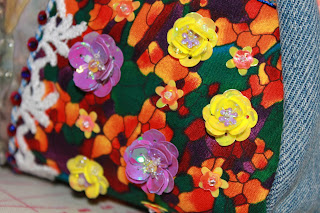 from Jo in NZ, I thought they would be to gaudy but they blend nicely and don't hang out to far to get snagged on things
Posted by Momma Bear at 12:44 PM 1 comment: Links to this post