I even missed my job(OK, lets not go overboard!)

the trip wasn't bad, we left a 4:30 in the am so the children would sleep most of the way & not utter that most dreaded of family trip questions
-are we there yet?- though the minute we passed over the Appalachians it started to pore & didn't stop till Monday (the day we left, of course!)

I wish I had pictures of the kiddles, in their finery, but someone dropped the camera & broke the flash so there went any hope of indoor photo's. & taking any outside was out of the question, As god himself was coming down in liquid form. I'll just have to wait for the professional pics. Poo! 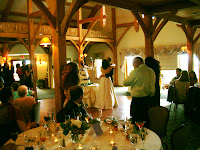 Adria's wedding was lovely even if she drove me a little bats.
You'd think no one ever got married before!
of course no one ever had a baby before Lily either!
Lilly is a lovely baby, all chubby & sweet. max is Max & as long as I don't get any late night phone calls about what a prick he is I guess he's OK too.
we did the new England thing & when to the Ocean we went to Woodman's & had lobster (yum!) & clams(eew!).
we stayed for my sil's PHD graduation. she graduated last may & this was just the ceremony. But as with everything that has to do with my sil, if she's not seen to be the happiest, smartest,put your own est here, then she is not happy! i love my sil, but everything she gets involved in has to be fussed over. & then fussed over some more! 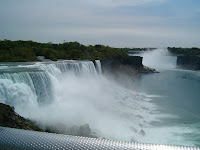 then when we could finally escape, we went to Niagara. which was spectacular! If you ever want to feel the magnificence that this world of ours has to offer, go to Niagara. We had such a good time, we're planning on going back, so we can spend more time looking around, we only had one day there, & you really do need more than that.


We didn't get to go under the falls or in the tunnel of the winds & you need your passport to go over to the Canadian side, to see or do any of the things over there. I highly recommend going if you ever get the chance!
An how we're home now & its time to go finish the laundry & start dinner.
Posted by Momma Bear at 2:47 PM 4 comments: Links to this post

HElp, Help ! I've been tagged! Christy! how could You!?
what do I do?! spill of course!

#1) I played 2nd violin 1st chair in the orchestras of my grade & high school for 7 years & still can't read music.

#2) I have NO sense of direction, none, nada, zip.
unless I have a map or very clear directions, I will always go the wrong way. even if I second & third guess myself I'll still go the wrong way. when I have all the time in the world this can be fun, just like pooh bear, I like going on little explores.

to the bored children in the back seat however, this can be torture.
"Maommm! do you know where you're going? "
coming from my 8 year old can be cute, coming from all three can be a little aggravating.

#3) my Mom kicked me out of the house when I was 16. so to make my way in the world I had to wait tables. I did this at a variety of bars, where you can imagine they would have been quite upset if they had known I was under age!

#4) I took a year off high school to get my life straightened out. then went back & graduated 2nd in my class.(of course there were only 12 girls graduating that year!) & I do have about 12 hours in collage course work under my belt but have never gone back, I don't multi, multi task very well! 3 things at a time is my limit, more than that & I forget to pick up the kids at school.


#5) when I was 3 I stuck a fork in the kitchen light socket & gave my self a good zapping, then years later, when I was a light tech for the lighthouse theater I did it again with more voltage & gave my self about a 2000v zapping that had my ears ringing & my head & body buzzing for a good 2 hours! this could be the reason I'm a bit off!)

#6) grandmother's favorite story to tell about me is,
when I was 3 or 4 we had all the cousins over for the weekend for my birthday . the day before was the party & that morning it was gently raining.
well my favorite gift, had been a bright red pair of rain boots & hat, & a bubble umbrella. do you remember those? all clear plastic with a colored bottom so you could put it over your head to keep it dry & still see where you were going.
so seeing as it was raining, I decided to go for a walk around the block, in my new rain gear.

the story goes that my cousin tom when to tell grandma what i was doing & having a flair for the dramatic, kept the best for last.
" grandma?"
"yes "she said sleepily, not opening her eyes,
"Flora went for a walk in her new boots."
"mm, that's nice dear"
"she took her hat & her umbrella with her"
'that's good "
she said still keeping her eyes shut in hopes tom would let her sleep a little longer.
"And nothing else"
next frame is of grandma flying down the block in her bathrobe & nightie, to go get me back in the house before the neighbors saw me walking around the block in nothing but my boots, hat & umbrella!

years later when my third child was 3 I had a similar episode at a friends house. Mara felt so comfortable here she stripped out of everything, including her diaper & went to play in the pond they had in the back yard!

#7)I love that my husband has a job that he loves.
I hate that the job periodically scares me to death.

as a Chicago Firefighter my hubs mostly sits around the firehouse polishing his engine & watching TV. the house that he's in isn't a "hot"
house. but the possibility is there for disaster.

I worry when he doesn't call back that I'll be getting a visit from Father Mulchrone & a chief to be named later, to tell me he's not coming home.

I know this in a small possibility , but it is a possibility. It's not an easy job to do & he does it with style & no little competence.
the job still scares me to death.But I would NEVER tell him to quit or be one of those wives who out of fright, would be less than supportive of him.I'm very proud of him.

now who do I tagg?
how about Janet of I'm going crazy; you come, too !
&
Gerry of http://sewing-southpaw.blogspot.com !
Posted by Momma Bear at 7:24 AM No comments: Links to this post 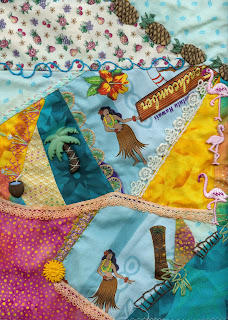 I joined a new RR at cq for newbies. It's create your own theme. my theme is pineapples & palms.
I picked this working on a quilt for the daughter, of my best friend from H.S., who loves both pineapples & palm trees, & I liked the idea so much I decided to hijack the theme.
I hope my ladies in CQ have fun with it.
I wish I could have embellished it more, but I've been working on the KKRR & working(ok, so it's only part time!) & trying to pack, plan & clean for this trip to Boston for my sister-in-law's wedding.
while I am looking forward to seeing Lily, her daughter, & looking forward to getting out of Chicago for a while, I'm not convinced this is going to be anything but a disaster!
My sil has this wedding scheduled down to the minute, She sent me the script for the day, & even Lily is scheduled! now how do you schedule a 5 month old!
I don't want to piss on her parade but I also don't want to deal with the incipient hissy when the schedule fails. Of course I could be looking at this all wrong, my RDG is looking forward to what he expects to be high comedy.
all i know is I'm going to be the one soothing ruffled feathers & calming hysterics. in purple silk.
We're driving out there, with our 3 kiddies in a chevy blazer. I don't know about this. It's either going to be a great family trip or the 7th ring of hell.
Maybe I've watched too many national lampoon vacation movies!
any way, I hope to have pictures & I'll post them when I recover from our vacation.
by all have a great week & I'll see you when we make our triumphant return!
Posted by Momma Bear at 8:16 AM 1 comment: Links to this post 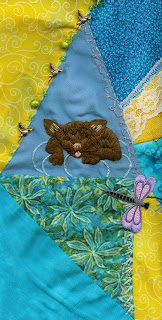 I've finished the work to Lorie's block, I satin stitched a sleeping kitty for her & gave her(him?)sweet dreams of mice in detached chain, & a row of humming birds with green glass beads. I threw in another seem treatment, done in straight stitch & french knots.

in other news I just received my copy of Carol Samples treasury of crazy quilting & I am soo excited about it! lots of eye candy & stitch combos to keep me happy for ever! or at least until I find the next thing I kneeed!
Posted by Momma Bear at 2:14 PM 1 comment: Links to this post 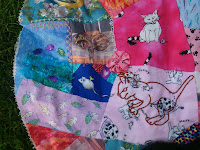 christy's ally cat is coming along swimmingly ! I added a fish tank, for her speckles to play in & a crown for the princess that she is! I think I may have gone a little overboard on the seam embellishments, i just went on a sewing toot! I just have to finish a few things here & there & I'll send it on to the next lucky recipient!
Posted by Momma Bear at 8:27 AM 1 comment: Links to this post