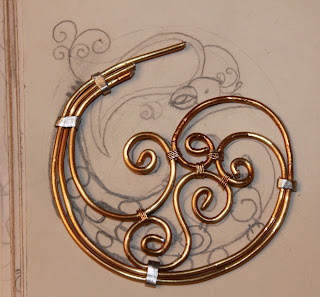 I'm swiping an idea from Gerry over at Olderose and Susan over at Plays with Needles and showing you how I come up with my own ideas'.
I do this in a variety of ways you see creating for me is sometimes a chancy thing, it doesn't all come to me at once, sometimes I have to go a huntin' but most of the time I get inspiration from books, paintings and other peoples blogs. a snippet of this a smattering of that, then drawing them in my sketchbook, where I try to organize (if you can call it that) the things that come to me or I just come across by chance. 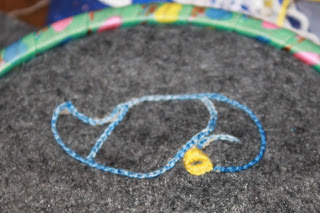 I've finally come up with an idea for my March BJP phrase "Whatever  is done by only me is your doing my darling"  It started out with an Idea for a tattoo I had of a bird in flight over a garland of daisies and roses with a dogtag held in it's beak stamped with "what ever is done by only me" and numbers important to he and I.

It has evolved into this bird holding a key in it's claws, stamped with "whatever is done" 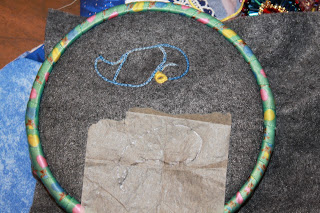 the key is stamped, I have shaped and bound the tail and started the bird body on a felt base, instead of my usual muslin because Gerry recommends it and her birds and bunnies are wonderful!  I've never tried doing it this way, having always thought it would be too bulky but with Gerrys tutorials  I decided i would give it a try the next ime I had a motif like this to do and I need a bit of extra bulk to this birdie. 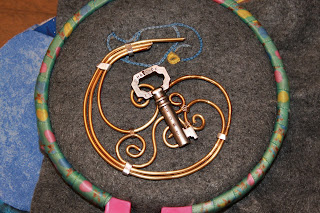 as you can see I've started on the outline of the body of my bird with a tight chainstitch and have the wing standing in line next. I plan to embellish the wing heavily with beads then attach it to the body separately to give it more stability and a little extra padding, though I haven't quite decided what to do with the wing yet I've gotten this far on inspiration so the rest of it can't be far behind!)
Posted by Momma Bear at 9:17 PM 1 comment: Links to this post