So, I entered this show

Nice to see people stopping and examining my work!


Sorry the pictures are so blurry but I only had my cell phone and people kept bumping me. 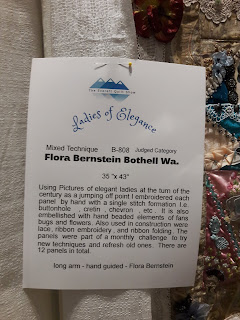 and a full quilt I called "ladies of elegance"


By the time I got there all the ribbons except the viewers choice had been given out.


Alas not for me!


I had been warned by others that judges don't receive crazy quilts well for a variety of reasons,
none of which seem to be consistent across all shows.

which is unfortunate because they sometimes will discount crazy quilts entirely, because many of them have no batting or "real quilting"

Mine were the only crazy quilts there

The best category I had to enter into was  "mixed technique" They had a "hand quilting" and "Hand pieced" selection but not a "hand work" selection.

I was ready for the disappointment, though

because every one wants to win right?

Yes they also switched the signs, but whatever

Still fun to see my quilts on the wall with official signs on them.

Posted by Momma Bear at 1:47 PM 3 comments: Links to this post

I was putting it off but now it's here and I am having a serious bout of WHADIDIDooo!
I have entered 4 of my crazy quilts in the Everette quilt show this weekend, April 25th-27th.

I am to be judged and I am nervous! Will this be good? bad? will no one notice?
why do I feel like I'm going out on my first date on live tv? Oh and I'm 14 again. UGH!
I do this as a challenge to myself. One doesn't know if one is any god until you go out and show other people right? the worst they can say is, Meh. Right? 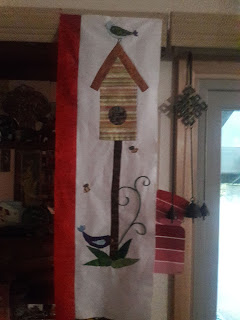 This is what I do when I'm busy doing nothing 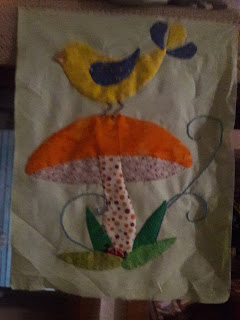 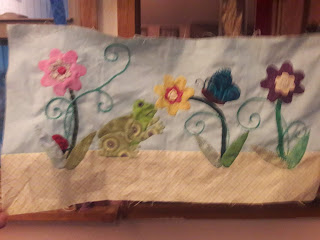 I don't get it 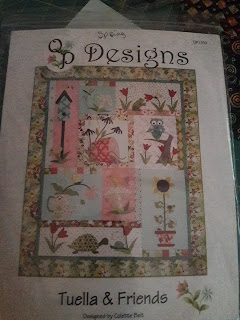 I still have that felt rug to finish

The hawaii panels to sew

I can never die, I have to much to do

I joke but its true, who else is going to use up my fabric stash?
Posted by Momma Bear at 9:00 AM 3 comments: Links to this post

So you all have seen some of these pictures before 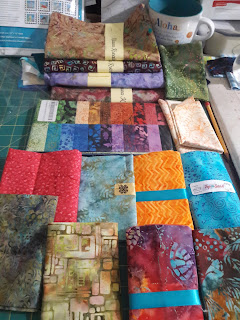 If you can go to Hawaii, I recommend going in February,

The hotels are not full of tourists, 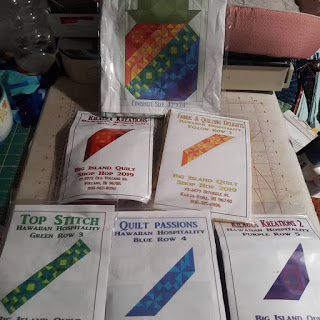 And the Big Island Shop-hop goes on for the entire month!

For anyone familiar with Western Washington's annual Shop-hop. ( june 21-29)
It's the shops way of thanking customers for their patronage.

You go around to all the shops,
that are left, (Grumble, grumble, fuss, fuss)
gather a free pattern or a kit if you spend x$ and you have a fun project to do. 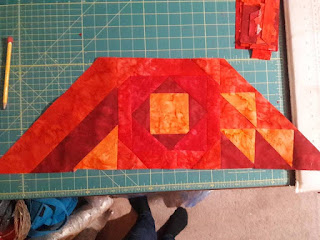 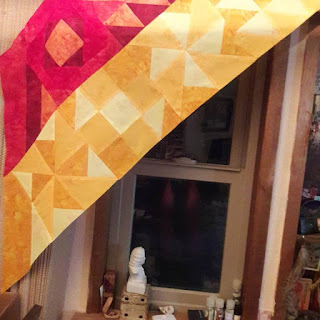 Fabric and Quilting Delights in the Kona hills

There was more orange in this row 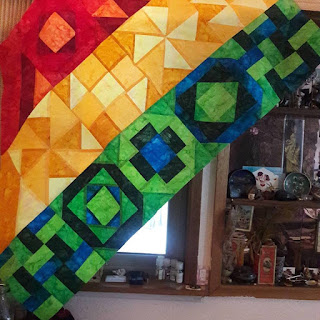 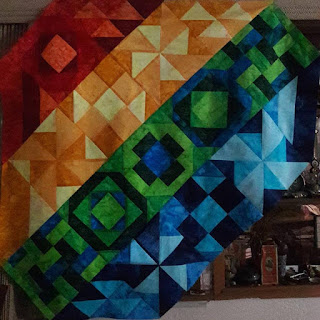 Quilt Passions in down town Kona 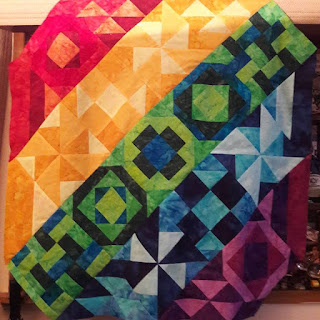 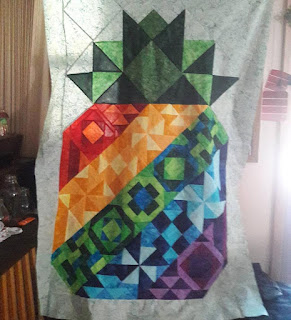 Here's the flimsy all done with top and background 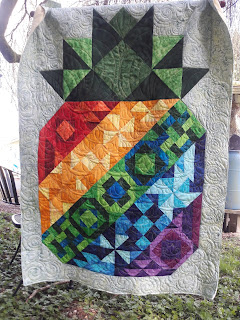 The top all quilted up pretty,

No binding yet, I'm thinking a dark green 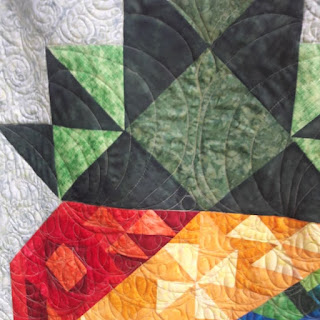 Here's my close up Mr. DeMille!

When one quilts a lot one is faced with a pile of oddments, so, 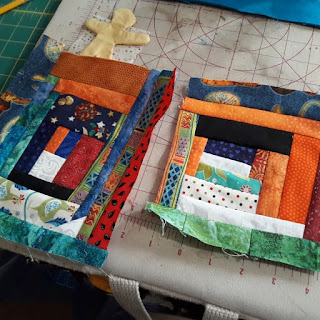 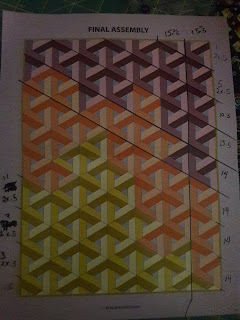 A pattern by Christa Moser

I suggest going anyway to see her other quilt patterns too

Lots of fun on that page. 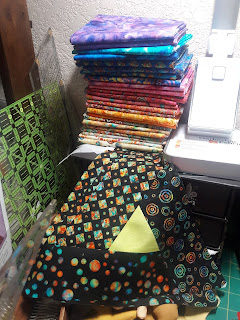 Here are the fabrics I will be using for mine


I even have a few blocks done

What is going on when I'm not busy sewing

down the hill from us. As she has expressed a desire to nEver live through another Chicago winter!
Its a basic trailer nicely laid out with a sun room in the front, moving into the kitchen to the living room down a hall with, 2 bedrooms and a bath. A nice little cozy nest, for an 87+ year old lady, to putter in.
Close to shops/doctors and transit to get around or us to drive her and it puts her a mere mile away instead of the 2010, in case she needs us.

The trailer park is snuggled into a nice wooded space, with manicured walks between trailers and a waterfall! Very pretty and very clean. I've even met a few of the neighbors, in the process of cleaning up.  I think Mom will like it here.

My youngest DD and I have spent the better part of 5 days cleaning the sucker out.

Bless her fuzzy little soul, for helping out with her step-grannies new place.

The husband/wife we bought the trailer from, seem to have never heard of the concept of cleaning under/around/behind things, or in fact to have ever moved anything TO clean.

Not that they left much behind except a few things scattered in random drawers, which you would expect, the dirt on the walls, shelves and that old "cooked chicken" smell, in the fridge, which I didn't.
Owing to the assiduousness with which the wife sprayed fabreez EVERYWHERE.

I now understand why. *deep sigh*

Though It took most of the day the Fridge is now clean and free of the crusted on dry "stuff" that was under/between the holders for the glass shelves. Yeccchhh!

Then there was the christmas wrapping paper and in one case, part of an old pick-nick cloth, with the fuzzy side elmers glued to the shelves!

The stovehood has been HOT GLUED o0! in places,
there is that expanding foamy stuff under both the kitchen and bathroom sinks
and the "new" shower surround has been repaired with caulk. o.0!

I expected a degree of deep cleaning was gong to be in order and a bit of things that need to be fixed, It is a 45 year old trailer after all.

But not having to scrub down the walls/ceiling of the cruft of years!

You know your in trouble, when the walls change color as you clean.
When the pine-sol your using makes runnels that are a different shade of grey from the one you are currently working on,  Eeeeew!

Did I mention they had 2 yappy dogs and a parakeet? No? Well they left us Something too in the way of a few feathers and enough dog hair,  dug so deep into the carpet and the rugs they left behind, to make another dog.

ThAnk goodness for the rug cleaner we got, years ago, to tackle the 20 year old carpeting in our own house!

I used 2 bottles of carpet cleaner on what amounts to 4 rooms of carpeting.
And I still have to vacuum one more time, to get rid of the dog balls left behind by the carpet cleaner.


This all amounts to what my Ex-hubbs used to call "Turkey-bird" engineering and has me muttering dire things under my breath.

All that being said, It's still a very nice trailer.

I would live in it.

Having had to clean a myriad of apartments in Chicago before moving into them this one was a 3. On a scale of, 1 being very clean to 5 being, OMG! fuck you people!

So all in al not too bad.

Sorry for the rant but I needed to vent,
or I'd explode all over someone who, probably won't deserve it.

This is when you start sizing up all the things you don't "get around to"at home and just how much does it bother you that you've never cleaned behind/around/under that?
I have come to the conclusion that other peoples dirt bothers me way more than mine

and Id rather sew.