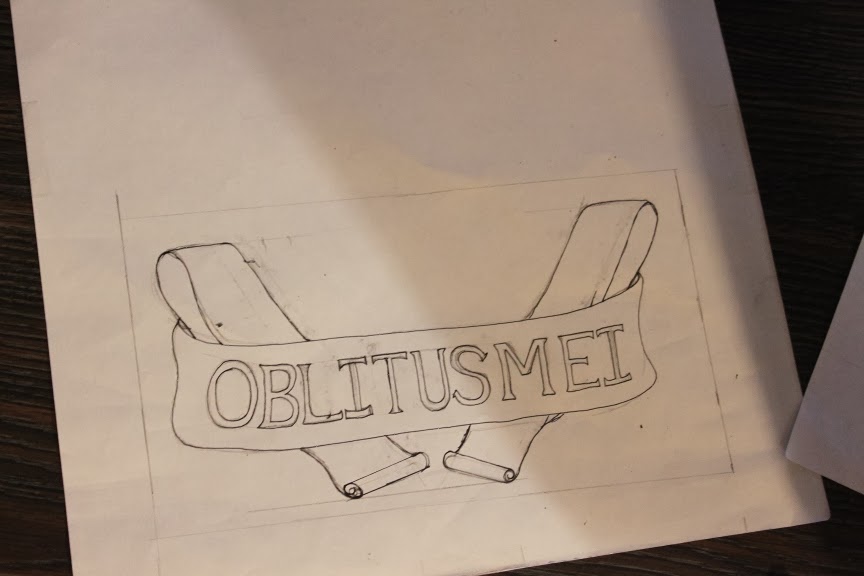 Started work on the maltese in gold work, that surrounds the shield also the rosary that encircles the whole thing.

the beads for the rosary come from an actual rosary my Grandmother, (Uncle carls mom) sent me when I was 14, it was blessed by pope paul and was her attempt at "saving" my soul from a godless existence.

I kept it because it was a gift from her and she cared enough to think I was worth saving. the poor old thing has been through a lot, Jesus fell off his cross, he now resides in a candle as decoration.
the cross itself is long gone, due to and unfortunate Madonna costume incident, at a club one night, in my misspent youth.
the chain broke so I re-purposed it as a scissor fob, but it is too heavy for the task and kept dragging my scissors to the floor.
honestly I think Uncle will get more pleasure from it, knowing it was a gift from his mother.
I still keep a 10 bead strand on my scissors with the medallion of pope paul. It reminds me of granny who, in spite of my "godless" existence, loved me anyway

I don't mean to offend anyone out there, who reads my blog but I really don't believe in religion as a valid way to live my life.
I find it to be based in stolen myths, from other older cultures because that was the only way they could convert the masses.

I have never truly believed and even when I thought I was doing the best thing for my children by sending them to a lutheran school, I let them decide whether or not it was what they wanted to believe or not. I am proud to announce they all chose science as a better answer.

I have much more to say on this but will leave it at that as to not offend those who do believe. just because I don't, doesn't mean I believe you shouldn't.
I will fight to the death for your right to believe anything you like, as long as it doesn't harm anyone.

as for offending people, well I find I offend people weather or not I agree with them. at some point you realize you can't please everyone and either learn to live with it or tie yourself in knots trying.
I deal with enough knots in my work...