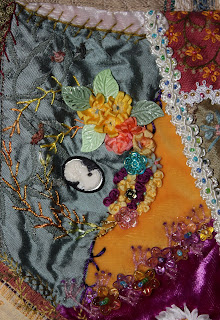 who runs our SRE class to complete my purse for the next class.

I surprised myself by making the deadline by more than two weeks! 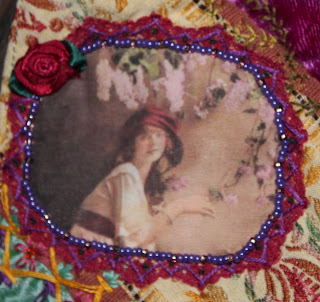 didn't want to be distracted by an incomplete project while they were here. I want to focus on them and take them to see fun Seattle stuff,while they are in town.

as you can see I finally decided where to put the bird,I thank you all for your suggestions and encouragement. 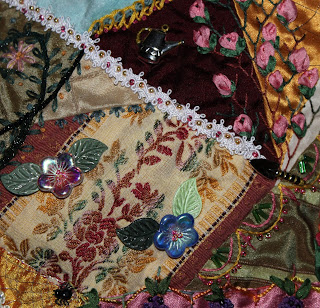 I took some advice from Gerry's blog Olderose to break up the straight lines, I didn't brake them up so much as tone them down with some beads so they weren't so screaming white. 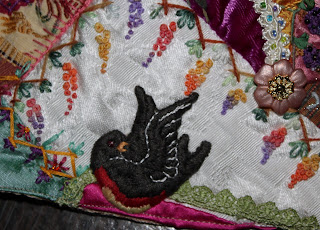 I think it all balanced out fairly well. my eye is drawn bird first thing but it's not stuck there like it was on the blue. then travel around the to the rest of the block 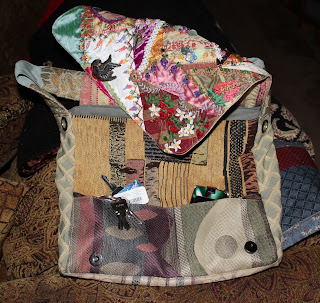 because there is a lot more to see! 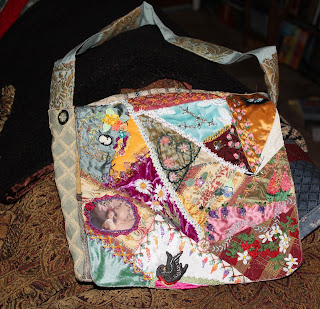 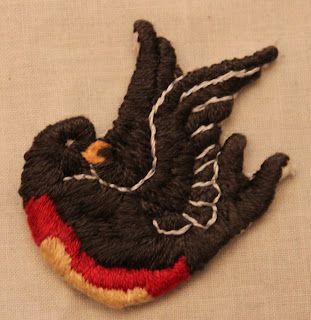 I embroidered this bird on muslin 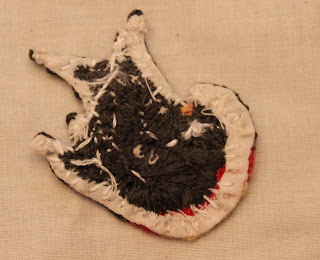 intending to put it in the nice open blue cloudy sky.
but when I got to that point it just didn't look right being too close to the butterfly. 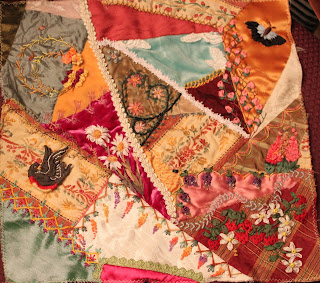 Now where do I put it? 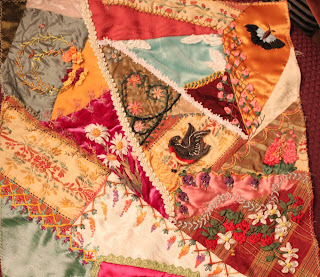 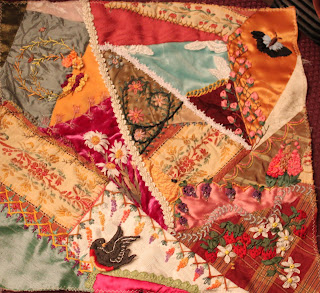 I have narrowed it down to three places,

so far my runners up are the smaller brocade patch and the wisteria grove.

so,
what do you think?
Posted by Momma Bear at 8:53 PM 3 comments: Links to this post

It's a loong way back up!

the first bike ride of the season is always the most optimistic.
you are certain that it's a beautiful day and will remain so for the whole of your trip.
you are positive that you will get to where you are going and therefor get back home in a reasonable amount of time.
and you have no doubts that you will make it there and back again in one piece.
getting the bicycle off the hook it lives on and out of the garage was no problem.
getting on the bicycle and riding the 2 1/2 miles down the hill from my humble abode was no problem, barring some windburn and freezing cold fingers.
getting my little bit of chores done was also no problem.
then the reality of the 2 1/2 mile hump back up the hill at a 45*angle sets in.
*Sigh*
it took me 15 minutes to get down the hill and almost the better part of 90 minutes getting back up it.
I vow to make that time shorter! I even took the long "easy" way go around the human habitrail (other wise known as the housing development ghetto) instead of the 60* angle from 39th ave to 45th ave straight up.
I'm not sure that was an improvement.
Oh well, I got out of the house, I got some exercise, and I got some frozen shelled edamame, good for handful-at-a-time snakin, yum!
Posted by Momma Bear at 8:36 PM 1 comment: Links to this post

Email ThisBlogThis!Share to TwitterShare to FacebookShare to Pinterest
Labels: biking

I finished my mothers birthday present, a pillow 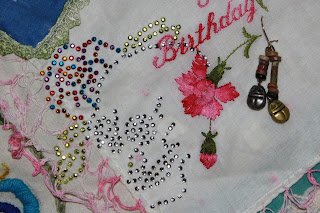 made from my grandmothers hankies.
all 3 of them, though the lions share were g'ma Lorie's , hence the big yellow "L" 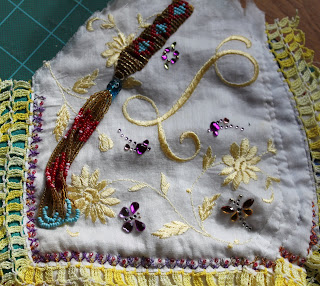 I sent it off to Chicago and she loves it!

so it's now safe to show everyone. 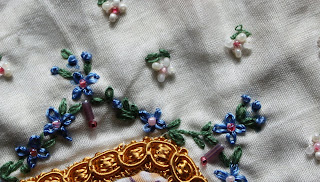 Unfortunately, in my infinite wisdom, (NOT!) didn't take a picture of the whole thing done and ready to go.
that's what I get for leaving things to the last minute! 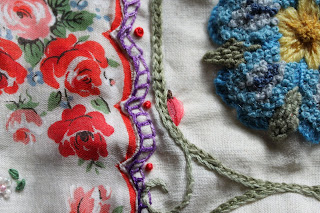 had a hard time coming up with things to fill this out, these hankies were my gran's but the present was for my Mom, who's images do I do? 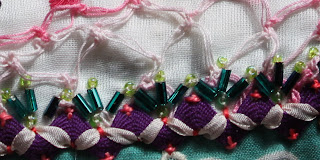 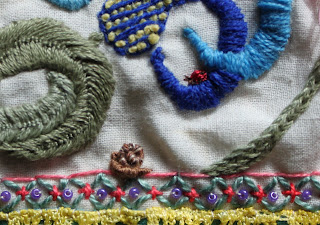 cover the corners that were left, some of those hankies were busy! 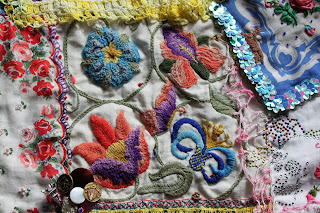 there are reminders of pets past, we had 42 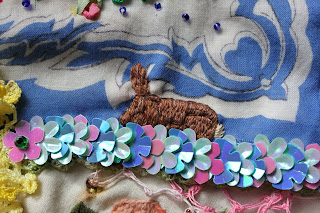 bunnies at one time in a 3rd floor Chicago apartment! 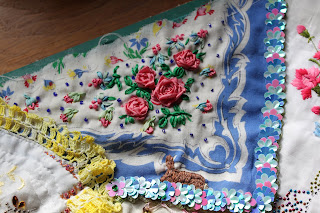 I bought a little bunny, then I bought another bunnie, don't one and one make two??


I had to put MR.Chuckles 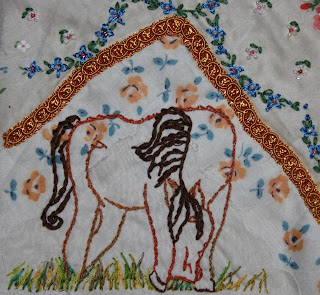 on there, he was Mom's horse back when Chicago had stables on clark and fullerton he is also a reminder of the Chicago Armoury Polo Club, mom was a groom and trainer and I was a gole tender and hot walker

When she was younger she used to race bikes on short track and I remember waiting for the herd to fly by so I could run to the center and watch her from the grassy spot in the middle.
when I was really little I rode in the bike seat on the ba 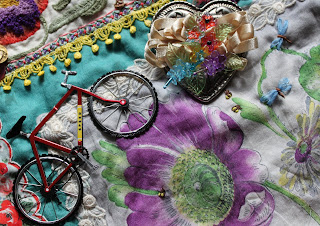 ck and we would do errands and such,
later we would ride on the lakefront

She gets to travel now, with her husband. they have been all over the place Europe, Malaysia, China Russia, 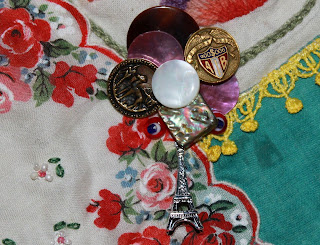 India and so on. Her favorite place is Pariss though, she has photo albums full of odd little corners of Paris. someday I think she wants to retire there if she can convince poppabear to go! 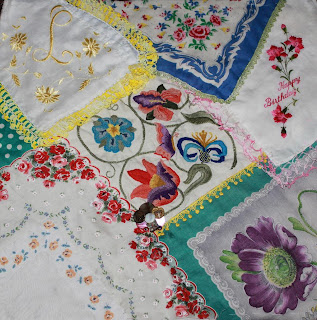 Then I would have an excuse to go to Paris, explore and fill my own photo album!
Posted by Momma Bear at 10:57 AM 2 comments: Links to this post