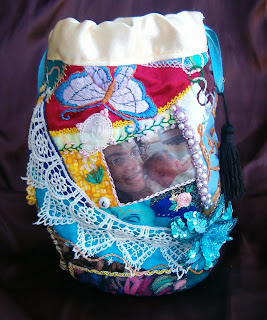 I've finished Lily's keepsake bag!
I just wanted to show off my 1st CQ project ever!
And, oh, bother! I posted the wrong blog for instructions it's actually on ati on the crazy road's blog at http://www.malinaplass.blogspot.com/
but that's ok because pat winter's stuff is loverly too!
Posted by Momma Bear at 10:41 PM 2 comments: Links to this post

Email ThisBlogThis!Share to TwitterShare to FacebookShare to Pinterest
Labels: purse

Growing up on the north side of Chicago 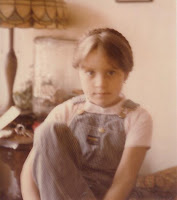 Pat Winter's Gatherings blog, http://gatherings100.blogspot.com/
has inspired me to write a little about my childhood.

Now, I grew up on the north side of Chicago, I've lived here all my life & frankly can't imagine what I'd do anywhere else! I love this city. I've also lived on , the south side & now the west side ( I've moved around allot)

I grew up in an apartment, off the bleachers of Wrigley field in the 70's, when that part of Chicago had a horrible Gang problem.
The apartment building next door was a boarding house,that was constantly going up in flames, (so we got to know the local Firemen very well!)& We had prostitution going on 2 blocks to the north. While not the most idyllic of settings, it was lots of fun to run around the neighborhood.

We had trees to & garage roofs to climb on, not to mention the occasional roof to see a game. We had a lot next door to our first apartment in the neighborhood, to play baseball & basketball in it was covered in grey rocks so there was no sliding into first, let me tell you!
we had cars to park in the lot,during games but you had to get there before the real car parks would come in or you would only get a 1$ per car while they got 5$.
There was the ma& pa across the street to go to with our dimes & nickels, for penny candy, & snickers bars( still think there smaller than they were when i was a kid!) & the Yum,Yum doughnuts when we were flush with cash after parking cars.
Though I must say as much of a tomboy as I was, I still loved a good twirly dress & my saddle shoes. they were hand-me-downs from some cousin or another, I was so upset when I grew out of them.
I begged my mother for more, & she flatly refused. I remember her saying how much she hated hers & couldn't for the life of her understand, how anyone could like them, let alone want more!
I learned later of course that we couldn't have afforded new shoes even if she had the inclination to buy them for me.
I was, what was later to be known as, a Latch-Key -Kid. I let myself out of the house to go to school & let myself back in after school & got all my homework done & the non-cooking part of dinner ready for when my mom got home at 7pm.
She worked for an Art studio downtown doing something called
" Key line, Paste-up " It's when you take all the finished components of a magazine page, like the pictures, the descriptions & the letters or numbers, & arraigned them, according to the artists layup, so they make sense.
I loved to go with her on days she either, couldn't find or couldn't afford, a baby-sitter. We'd take the Howard"A" EL train to the Belmont stop & run over the bridge to the other side of the track, to catch the Loop's'B train, to the Chicago ave. stop & walk to her office building.
It was a big blocky building, nestled between the on & off ramps to the Kennedy expressway.
You could watch the cars wiz past the on & off the ramps & depending on the time of year, watch them slide back down! on the way home we might stop at the daemon dogs under the Fullerton "EL" stop for dinner & the Public library for a new book, as a treat.
Later We discovered that the Chicago Armory Held Polo matches in their indoor arena in the winters starting in October, going through April. Was I in heaven !
I was 7 & mom got a job as a groom right away because she knew some of the people, from her days working in Chicago stables in her child & young adulthood.
I got to be one of her Hot Walkers. ( OH, Raptures of JOY!)
That means I got to walk the horses around the Armory's basement after they get off the polo field, so their insides & tendons don't seize up on them. It's very bad for a horse to be put away hot & sweaty!
Later I learned how to be a groom & had my own string to look after!
I suppose a few child labour laws were broken, but I dare you to get between a 7 year old girl & a horse!
My mother raised me all by herself, & while I don't necessarily agree with all her decisions, I think she did a pretty good job under, not the best of, conditions.
My dad & she divorced when I was 2 & he took off. I saw him every 2 weeks. for our week end until I was about 7 or 8, when he told me, He couldn't come to visit me anymore. I did learn later he sued for custody & lost all his rights to see me. Again I can't agree with all the decisions, but I guess came out OK in the end.
I'm felling a bit Narcissistic so,I think that's about all I can write about myself for one day!
Posted by Momma Bear at 4:36 PM 1 comment: Links to this post

Email ThisBlogThis!Share to TwitterShare to FacebookShare to Pinterest
Labels: Chicago stories, growing up

I've started a little side project for my new niece lily-sara.
its a little blurry but the composition is good, it draws the eye right to where i want it. I'm very pleased with it so far! I'm going to make a bag out of it. you can find the pattern for it on, Ati on the crazy road, blog at http://malinaplass.blogspot.com/ look at some of her other stuff too its lovely!
Posted by Momma Bear at 12:17 PM No comments: Links to this post

Email ThisBlogThis!Share to TwitterShare to FacebookShare to Pinterest
Labels: purse

welcome to the family!

My sister-in-law had her baby!
It's a Girl!
Welcome lily-Sara!
Posted by Momma Bear at 8:01 PM 1 comment: Links to this post

Oh, My, God! Is it cold here in Chicago!
The weatherman says it may get up to 6deg,(oooh1 a heat wave!)
if the sun ever decides to come out.
right now its a balmt -20 with wind chill factor.
I need to make a batch of hunga, hunga food
to warm up the Indians when they get back from school
it's definitely beef stew & hearty soup time, in my house!

in other news I'm Crazy Quilting up a storm!
I'm not happy with my 1st block,
but the second is lovely &
the third will turn out to be my best effort yet!
I'm sorry about having to show them in 1\2s, but my loving hubby has the camera & I had to copy them on the scanner

I've also been looking through SharonB's take a stitch tuesday web site, otherwise known as TAST,
(& who isn't!) so many wonderful idea's for stitching my brain hurts!
I love doing all the stitches & can't wait for tomorrow for the new lesson.
I'm having troubl adding links to my blog so this is my next project.
I want to link you who visit with all the b e a utiful cq out there!
Posted by Momma Bear at 10:19 AM 3 comments: Links to this post