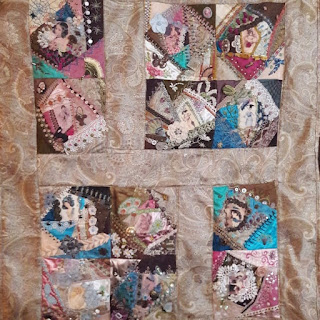 So this cq has taken a long time to finish.

What I ended up with was a heavy brocade upholstery fabric

Can I tell you a secret? Promise not to tell? 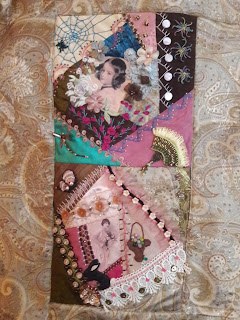 I stole the backing, from material I 'm supposed to hem for my daughters mother-in-law, for a table cloth.
To be fair there is plenty more and I feel, not at all, guilty over the theft!

Its your own fault, if you leave me in charge of the perfect material, to finish something I've been agonizing over for 3 years! 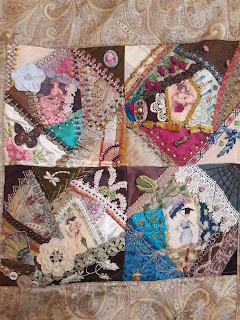 Aand there you go, Mom logic.

It was bound to happen at some point.

Any way, It's ALMOST done. 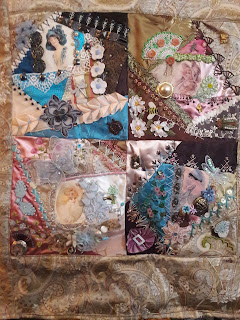 I was looking at it hanging there on the curtain in my sewing room and decided,


It looked to plain, Just hanging there, It looked bare.

If something as embellished as these panels can be said to look bare! 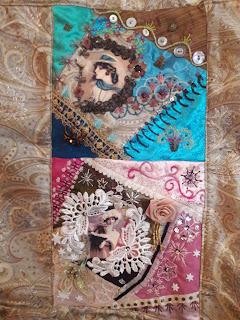 Than sewing them all together in a bunch, throwing a binding around that and calling it good.

Well the spacing part worked out bUt Instead of the balance I was going for, the askew part just ended up making it look more awkward.

So, I am in the process of adding laces and flowers and stuff,

so it doesn't have all that empty space between the panels.

THey make it look Meh.

See what I did?
Yeah, I know it's not great if you have to explain it.

I find myself explaining
a lot

To the point where I don't want to speak

I get my "bah humbugs" early

I can never decide which.


I want to hibernate. 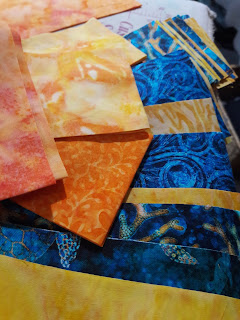 This doesn't mean I haven't been busy.

I wandered into appliqueing again via a few things bought in Hawaii last years and never gotten to.

When I realized I never showed you all The Honu (turtle) protector of the islands! I finished him before thanksgiving

The Nene, Hawaii's state bird, not quite done. The baby nene still needs it's beak& legs, the corner stones need to be done and then the berry vine they like to eat needs doing. 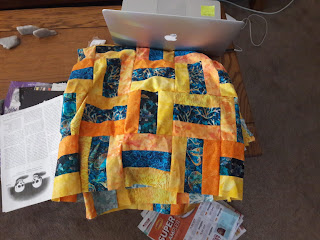 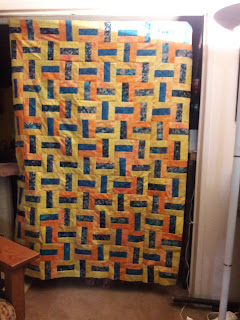 Then I found out my oldest and dearest friends mom has breast cancer so I'm making her a snuggle quilt for when her chemo gets going.

Also linking with Oh Scrap! cause everything I do is scrappy!

I hope it's cheerful enough for when she can't manage


I also found an OOOOld UFO! 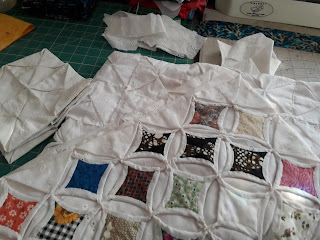 A cathedral windows quilt I started back when my old, old , old machine died so I'd have something to do.

I don't remember when I put it aside but it went everywhere with me for a while.

This is a great project if you travel a lot.

It takes up a minimum amount of space and you only need a pin cushion a needle, scissors and thread

Unless you let it grow out of control then it's like kudzu, everywhere all at once!

I'll show you how easy it is,
you need an even amount of 7" squares of whatever cotton you like, 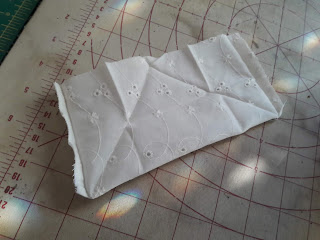 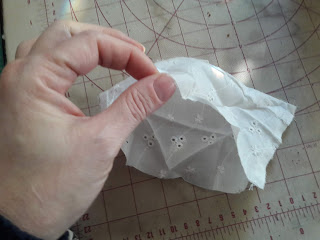 Fold the square in half

and sew both ends

Leaving the long end opposite the fold open

Turn inside out so the seams are not showing 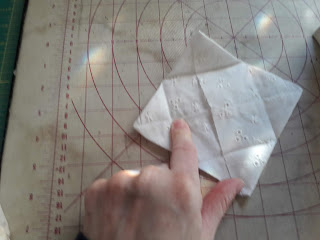 Now open the pocket till you form a square

Crossed by the raw edge. and Iron nice and flat.

Don't worry about finishing this as it will be under all the folds that are coming next. 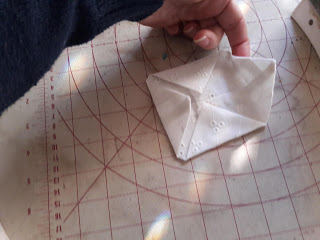 Fold like an envelope so all the points meet in the middle.

Now sew just the tips of the points together so they all meet in the center.

Leave it floppy so you can put your finger underneath it.

I'll tell you why in a minute 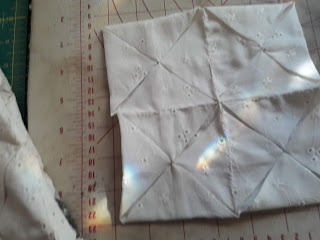 Now sew the whole mess together!

I like a fast and easy whip stitch here 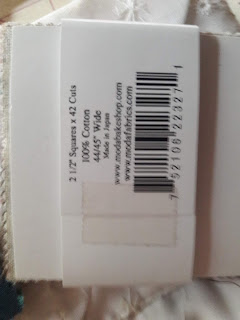 Don't worry about being too neat they will all be hidden by the 2"-2.5" squares you are going to use for the window effect

BTW this is a great project for those 2"-2.5" charm square packs you have lying around 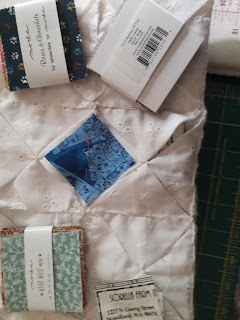 Now place a square right in the middle of the square formed by your seams, pin it. 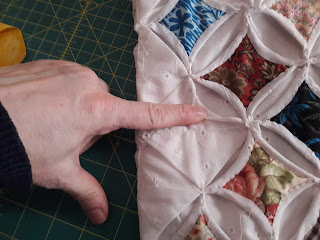 See how my finger is demonstrating how to fold over the edge?

That is how you are going to cover all those raw edges! 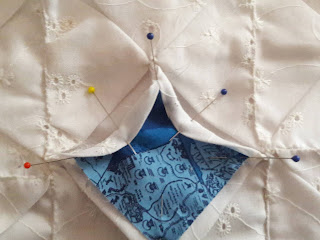 The ends should fold over automagically

Pin them down too. 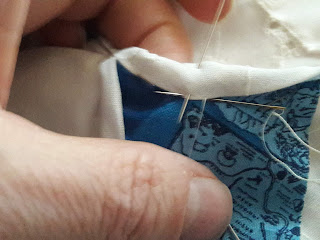 I use a scoop stitch method here.

Sorry about the blurry but it's hard to sew and take a picture!
This is why I leave the center points floppy,
so I can get my finger in there to sew it all down! 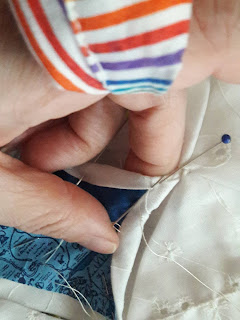 Take a stitch so you catch both sides of the fabric

As I have shown here 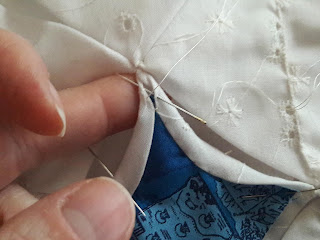 Take another stitch where you went in initially 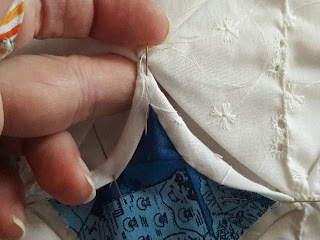 Both sides should pull together making a neat point

Scoop stitch to the bottom where your next stitch will go

Rince/repeat until you are done.

See how you like doing it before you go crazy 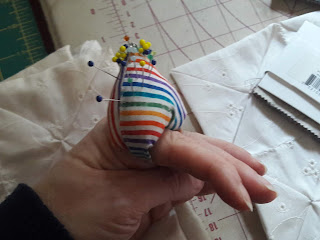 Now for those of you who noticed this clever little thing and want one, Extra credit!

Folded in half as a triangle, right sides together.

Sew along both edges, leaving enough room, so you can turn it and stuff it.

Don't go to crazy and don't use batting, unless its really loose fluffy batting.

Hand sew the seam closed when you are done.

Now take both bottom ends of your triangle, where the fold is.

Sew them together, securely, nice and tight.

Bonus fact, if you fill the end point with walnut shells (about half way) before you stuff it you will have a bit of needle sharpening.
I don't recommend emery, unless you are using a really tight weave fabric - OR - you want to double up on fabric.

Because after a while using it, the emery will start to leak out through the needle holes and leave you with a floppy pin cushion.

I get my walnut shell from the pet store, in the reptile bedding section.
It's a huge bag that, will last you for ever, so be warned.
Posted by Momma Bear at 3:50 PM 1 comment: Links to this post