A tale of woe

From a balmy 65* Hawaiian night to slippy snowing streets at 28*, nahugngh.
Off the plane, I was wearing what I left home in, socks, ballet shoes, clam digger jeans, a tank, a t-shirt, 2 sweaters and a scarf, mind when we left, it was 55* and raining.
You know normal Seattle weather.

Seatac IS NOT heated, we were on the red eye, (11pm to 7am, I am NOT doing that again) so we got  next to no sleep, and to complete my personal misery, I got my period. (Fme)
Apparently I was being punished for something I did earlier, I don't know what that could be but something I've done pissed off Karma.
To top off the hilarity our ride was 1.5 hours late to pick us up at the airport, they overslept! -.-
We came home to snow, lots of snow, 2 whole storms worth, which was fun getting through as no, they don't use salt on the roads, they use sand (because environment!).

Seattle really doesn't have the equipment to deal with this white stuff and as they get a snow storm like this maybe once every 3-5 years it's understandable.

Mostly it rains. When we do get snow, it rains and melts away by the next day, no worries.

It doesn't linger or get colder, get mashed down into grey slush at the side of the road and freeze into a sheet of ice like its doing now. 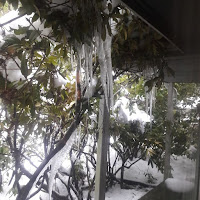 went to check something in the garage and tried to open the car door, it was locked so had to trudge back to the house (omg) find the keys, trudge back, woop the car open, no.

Even if we could have gotten out of our garage, the day we got home, we'd at that point gotten 9" of snow.

We couldn't have even gotten out of the driveway as there is this Enormous hedge that runs about 30' alonside it and It decided to fall over as well.
There is also a little dip and a rise at the end

where they have over-paved the road so many times, its about a foot higher than the driveway.
If there is even a hint of ice and you stop for cross traffic, you're stuck.

The next day, as Adam was taking snaps of all the picturesque scenery in the backyard after yet another snow storm that gave us almost 20" of snow,
there was a loud pop, rip and a bang of the tree next door
taking out one of our trees across from it, the power lines to the garage and two of our neighbors behind us. *sigh*

Then joy of joys, another of our trees decided to give up its burden of snow and ice build up, fell over and was only stopped from falling into the driveway by yet another tree, which will now have to be sacrificed this spring. 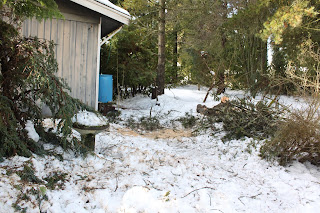 On the bright side the overly engineered birdbath survived!

We spent all day yesterday chainsawing the danger tree so it wouldn't cause any further damage and destruction.
Today we woke up to a sloppy wet mess of melting everything.

If were lucky it will all melt before the next storm comes in and turns us into a ice rink, then dumps snow on top, just to make it more fun.


On the plus side the sun is out and the willow tree is sparkling at me from all the prismatic ice chips in its branches, very pretty.

There is a family of at least 25 Juncos in the backyard. Where they came from and what they are after is beyond me but I've never seen so many at once.
So many in fact, they are chasing off the stellars jays and the squirrels, so lots of noise as they all duke it out.

So as we can't get out of our garage to shop I have appealed to a very kind neighbor with 4 wheel drive who has very nicely volunteered to take us to the cosco to stock up next time they go, blessings be upon them!
Last night I was able to bum a ride from DD#2's boyfriend, who's mom has a jeep. Who got me to the grocery and back, for fresh veg and eggs so we we're not living off meat with a side of meat.
other than that everything good!

If you are wondering why we shut down for 7"of snow imagine San Fransisco, all those lovely big rolling hills, now imagine it with snow. Yes, we have LA worthy hills!
Fun for driving sideways on ice, so mostly we stay home.
No point in giving emergency services more to do.
Posted by Momma Bear at 2:18 PM 1 comment: Links to this post