My grandfather was born in Austria in 1893 when it was still the Ausro-hungarian empire and raised on a farm, he ran away from home when he was 8 and eventually went to work in Vienna as an apprentice to an instrument maker.

In 1912 he came to America and moved to Chicago. He became apprenticed to a painter, where he painted the stations of the cross in st.clements church. 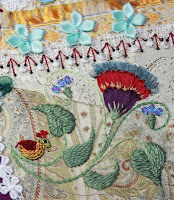 I remember him as an old man, partially deaf, heavily accented, gruff, with a twinkle in his eye.
You never quite knew if he was joking or berating you. he taught me how to play chess and encouraged me to use more colors when I drew or painted.
He told me once "there are rule's, and they must be broken but you can't do it all at once, a little at a time or there is chaos."

It seemed silly at the time but I have gone back to those words time and time again. 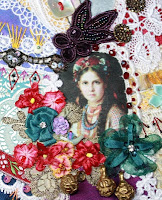 This is the piece that was in the "crazy quilt are quilts too" contest over at Thearica Burrows blog "Pigtales and Quilts" so I had to wait until it was over to show off! 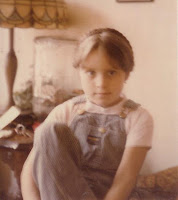 I chose this picture because she looks very much like me at an earlier age.

There are more of the flowers that the Baltic people like to depict in their artwork and embroidery here too.

there is one block left in the series.
Hopefully I will be done with that one soon. 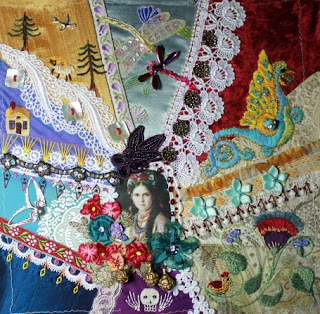